Share to Facebook15Share to TwitterShare to EmailShare to More10

BERKELEY, Calif. – Information-packed sessions on attributes and skills essential for successfully navigating higher education as a top administrator filled the first day of the Executive Leadership Academy at the University of California at Berkeley.

This year’s five-day gathering, which began Monday, boasts its largest cohort among the 11 since it began nearly a decade ago. Fifty-five men and women from across the nation, primarily from underrepresented minority groups, were accepted into the exclusive program housed in the university’s Center for Studies in Higher Education in the Richard and Rhoda Goldman School of Public Policy. 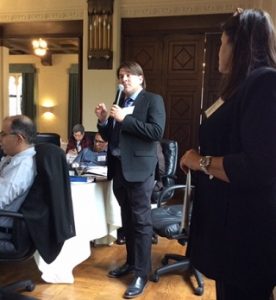 The program – designed to increase diversity in the upper echelons of campus leadership and to provide a turbocharged boost to the fellows’ ascent to chancellor, provost and president posts – is extensive and intensive.

Fellows are scheduled to participate in 28 training and development sessions that run the gamut of what is needed to effectively lead an institution, from legislative issues and campus politics to budget and financial resource management. The interactive sessions are facilitated by key leaders within the UC system and from colleges and universities elsewhere in the state and nation.

Many of the week’s presenters, including Jones and Wood, are former ELA fellows.

Recounting how he spent $19,000 participating in development programs as he climbed the leadership dollar, Jones said it’s an investment that he believed would pay off.

“But it wasn’t about the dollars,” he said. “It was about pursuing my goal of becoming a president.”

He stressed the importance of being a student and a lover of higher education, as well as preparing for a demanding role.

“You’re expected to do it all,” said Jones. “You wear 100 hats. And you always have to think of yourself as a leader and understand what that means. You don’t want to go astray by forgetting that you are a leader.”

It’s vital to be mission-driven, authentic and above reproach, Jones said, “and appreciate that you set the tone.”
“Remember that all of us are temporary,” he added. “We are custodians of the institution and we have a responsibility to leave it better than we found it.”

While the average profile of U.S. college and university presidents remains a White male in his 60s with a doctoral degree, seven years in the job and a one in four chance of having been a president before, some key changes are occurring, Davis said in her presentation.

The percentages of women and minority presidents, thought disproportionately small, is growing, for example. Additionally, fewer presidents are coming from outside higher education, the average age of presidents is increasing while their tenures are shortening and previous presidential experience is on the rise.

Based on current rates of change, women presidents and Black presidents are expected to reach parity within a few decades. However, progress is so slow and insufficient for Latinos that parity cannot be projected, and based on current trends they still would be underrepresented by the year 2060, Davis said. 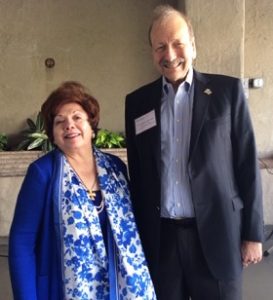 Between the diversity numbers and major challenges related to money and budgeting, presidents going forward will need to be data-savvy to successfully confront issues of student success, Davis said.

Marcus Brown, director of equity, inclusion and compliance at California State University Bakersfield, said a new mentor encouraged him to apply to ELA to broaden his career path.

“It’s been inspirational, number one, because what I’ve heard from the faculty members so far is diverse experiences for how they assumed the next position, and so I’m seeing myself being able to do that,” he said. “The other thing is, while I don’t yet know what my end goal is, what I want, what I’ve been able to learn here has been rewarding, has been insightful, has been comprehensive, as well, in understanding the dynamics of each position and each level.”

Honest and informed discussions are designed to prepare fellows for the realities of heading up schools, said Josefina Castillo Baltodano, ELA founder and executive director and a former college president.

An executive coach who has helped than 50 leaders become provosts, presidents, chancellors and deans, Baltodano said the program is intentional about teaching executives, emerging executives and senior executives how to lead schools in a multicultural world.

Demand for the program has increased so much that there already is a waiting list of 22 fellows for the 2020 cohort, she said.

Baltodano encouraged fellows to seek mentoring from each other as well as faculty, practice what they learn and share it with others when they leave.

“We’re like each other’s cheerleading squad,” she said. “We want to be president of your fan club. And that’s what we want you to be for each other.”

In her session about executive leader skills and traits, Baltodano assigned a leadership skills inventory and dispensed tips on crafting superior cover letters and curriculum vitae and how to perform well in a job interview.

She urged fellows to cultivate a “servant leadership style,” which she said is “all about leading and teaching and service and putting others before yourself.”

Advice to demonstrate personal and interpersonal skills such as empathy, honesty, humility, confidence and resilience and to always keep students and the school’s mission first was a common thread among speakers.